Political Memory: Luc Chatel, President of the Council in office 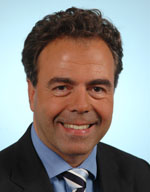 As regards to copyright, Mr. Harbour says that we should have a

notification requirement for electronic communications networks services providers to inform subscribers about unlawful uses of networks and services. He also says that we should encourage cooperation between the stakeholders in order to promote the broadcasting of legal content. This seems to be very balanced views but we have to err on the side of caution now because this is a very

sensitive subject in your assembly as well as in the Council.

The third subject that I intended to address, which has also come out

several times in your debates, is of course the question of the protection of personal data and, more generally, issues related to content, compared to the container. Eric Besson has responded in part to you on this subject, I believe that the goal of Presidency is not to oppose each another or to impose a model, but I was sensitive to a number of interventions which have been raised this afternoon to indicate that if we build all this, this economy of the future, source of growth for tomorrow, it is of course for the European economy, but it is also to enable our culture, our players in this field, to disseminate more on a worldwide scale. So I think we cannot separate the two subjects, even though I know that in other circles some important debates are also underway on subject. One must keep in mind that this modernization of containers must also be designed to promote dissemination of our content and copyright protection so as

to preserve the creation in the European Union.